Last night I took Indy for a jump lesson at my coach Ricks place, Winters End.   Indy has turned out to be a careful and brave jumper, but racing for 7 years has left him heavy on the forehand and not really sure how to move his front legs up and get under himself behind.  True story about Indy - when I first started riding him he wouldn`t go over a pole.  It took me, probably two or three weeks before he would go over them first time.  He literally had no clue how to LIFT his legs.  It was hilarious at the time and I was pretty sure he wouldn`t be much of a jumper.  Just shows what I know!

I asked Rick if we could work on course work as I want to upgrade to Entry level for our next event (2`9-3`1 courses).  Indy, is the polar opposite of Penny under saddle. He`s more of a push ride and I have never, in my life had one of those.  It is an adjustment for me to learn how to ride him, and not over- or under ride him.  I also wanted to do some schooling for his ditchiness and Rick set up an awesome fake ditch for me in his home made devils dyke.

We started the lesson working on my position.  My hands have become the bane to my existence this year.  Every single person I ride with and my regular coaches are all on the war path to fix them, and I am sooo glad they are because I obviously want to make my riding the best I possibly can.  Rick had me ride with soft, following hands, with very little contact.  Held close together and just above the pommel on the saddle.  Concentrating on keeping my neck in the back of my collar, my toes up, and being as still but following as possible.  We started through trot poles in two point and moved onto a waiting line of two cavalettis.  Indy went through beautifully, and I stayed out of his face to his enjoyment.

We then moved onto a single vertical and focused on the same thing.  Rick had me get into my jumping position from the walk before my canter transition.  This is to ensure I don`t upset the balance and have to waste time rearranging things once cantering.  I use this at home and shows and I find it really helps the quality of the canter right off the bat.  Indy cantered down to the  single verticle, patted the ground and jumped nie and round and cracked his back over the fence.  We did it several times back and forth with the same feeling, working on me staying out of his way and sitting up nicely with my chest up and hands soft.  I have never felt Indy jump quite so well, so it was clear the exercise was working.

From there we moved onto course work.  We concentrated on my position and not interfering too much with Indy, getting him to the right spot before the fence where he can best use his back.  Rick is very adamant about jumping your horse correctly, so they learn how to use their body and also to get the most out of your horses jump.  Indy was very steady, easy to ride to the fences and jumping very straight and up and over them.  I was really pleased.  The other issue we worked on was Indy pulling down onto his forehand.  He likes to grab the bit sometimes and do this as a habit from his racing days.  He finds it easier to go forward this way.  I make the issue worse by stiffening my hands and pulling.  Instead of this, Rick told me to follow his mouth with soft elastic elbows, and simply raise my hands gently.  Voila, he instantly picks his head up.  Add leg help him balance and that pretty much eliminates that as much as is possible for him at the moment.


To finish the lesson off, we jumped the make shift ditch on the grass of the jumping ring.  Using the same technique, he popped right over without a look.  We did this a few more times at trot and canter and called it a night.  It was a great lesson.  Indy was his usual hard trying self.  I was dripping in sweat after, and feeling confident about our upcoming upgrade.

Next up, jumping lesson on Penny on Saturday, and cross country schooling with Indy in the afternoon. 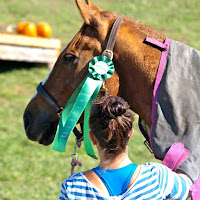 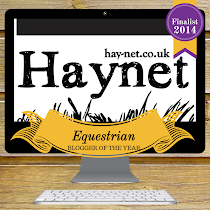 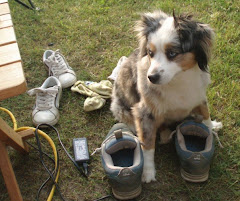